A Night With True Heroes

A few weeks ago I had the pleasure of having a Hero Awards Night for the Hero Project class that I mentored this past winter semester for a class of homeschooled youth ages 13-15. This is a LEMI project for scholar phase. We learned so much together!

I invited Elder Enzio Busche to come and speak, since he lived in Nazi Germany and was part of Hitler’s Youth Army. I knew he lived in my area because my friend Aneladee had invited him to come speak to a Thomas Jefferson Youth Certification class about 7 years ago at our Commonwealth School. He is such an amazing man! If you want to know for yourself, just go read his book pictured below.

Here’s a clip from one of his speeches at BYU. You can just feel the love oozing from this man!

Some of the books we read for the class were the two Uncle Eric books by Richard Maybury about the two world wars, The Hiding Place by Corrie Ten Boom, and Flags of Our Fathers. I wanted to give the students a non-statist view of war and heroes, so that’s why we read the Uncle Eric books.

I also invited Connor Boyack to come speak, because I love his non-statist perspective on politics and war. He is one my heroes. He is the president of The Libertas Institute, an organization dedicated to preserving liberty in Utah. Connor was featured in The Huffington Post last fall and on the Tom Woods’ show last January. He and Tom are definitely my favorite sources of news with a liberty perspective. Connor even started a news blog called The Golden Rule News Network.  He did a great job of talking about heroes in the true sense of the word.

He showed us pictures of true heroes and then asked the youth to guess what these heroes all have in common. The heroes included Rosa Parks, Sophie Sholl, the Chinese hero who stood up to the tanks on Tienenamen Square, Alexander Doniphan, Helmut Hubner, and Edward Snowden. He offered his new book as the prize for whoever could answer the question. That generated a ton of excitement among the youth! The shot up all of their hands and started guessing.

One of the students, pictured above, came up with the closest answer, although it wasn’t exactly what Connor was looking for. The answer was that all of the heroes stood up to government authority to do what is right. It’s important to realize that the government is not always doing the right thing and the right choice is to stand up to it.That’s why the Uncle Eric books are so good because they show that needless murders have happened in the name of government and war. They point out that war tends to expand government and encroach on liberty.

Here is Connor’s new book. It’s an explanation of the book, The Law by Bastiat, for kids. What a great idea! Connor plans on writing many more books about the Tuttle twins as they learn about the proper role of government and inalienable rights. You can order the book here. 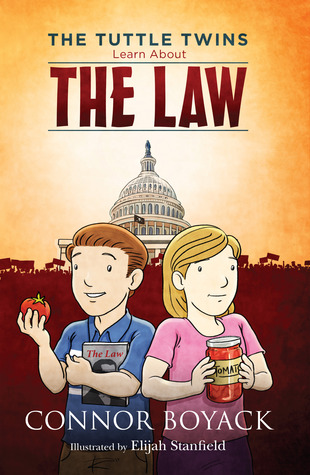 Here is a quote Connor used from President Spencer W. Kimball in his presentation that night. I agree! Someone even started a website based on the article.

In spite of our delight in defining ourselves as modern, and our tendency to think we possess a sophistication that no people in the past ever had—in spite of these things, we are, on the whole, an idolatrous people—a condition most repugnant to the Lord.

We are a warlike people, easily distracted from our assignment of preparing for the coming of the Lord. When enemies rise up, we commit vast resources to the fabrication of gods of stone and steel—ships, planes, missiles, fortifications—and depend on them for protection and deliverance. When threatened, we become antienemy instead of pro-kingdom of God; we train a man in the art of war and call him a patriot, thus, in the manner of Satan’s counterfeit of true patriotism, perverting the Savior’s teaching:

“Love your enemies, bless them that curse you, do good to them that hate you, and pray for them which despitefully use you, and persecute you;

You can read the whole article right here.

8 Responses to A Night With True Heroes