Countdown to Christmas 5 Days Left: Merry Christmas from the Duggars (and the Hughes)! 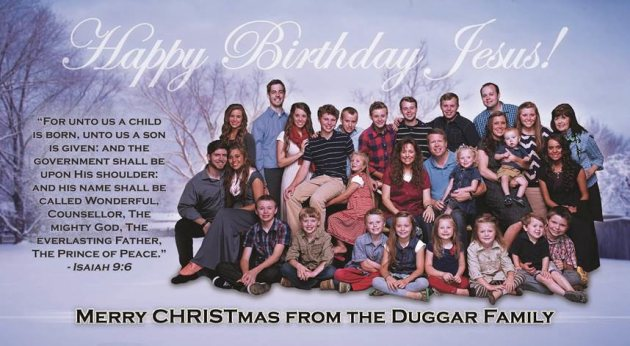 Just who are these people with the Duggars? Can you believe it’s another MEGA homeschooling family? It’s the Hughes Family, from the Hughes Brothers Theater, in Branson, Missouri. The Hughes family is a family of entertainers who do a show at Branson: mom, dad, and six adult brothers, each with a wife and kids. They are the world’s biggest performing family, and they are LDS! My firstborn son got to meet one of the granddaughters, Kristina (she’s in the pic above, let’s see…standing to the left of the blond girl who is two people above Jackson Duggar…now you just have to know who Jackson is to find her, hee-hee). My son and Kristina met when they both tried out for the Andau scholarship for GWU three years ago. They became friends, so the following summer my son and his buddies took a road trip to Missouri to be special guests at Kristina’s family’s home and see the whole family perform.y

How cool that the Duggars and the Hughes know each other! The Duggars went to Branson last month to perform at a benefit concert, where this picture was taken. Maybe the Hughes can get the Duggars to come to Utah, where he Hughes used to live, to visit and perform! You can tell both families believe that children are a blessing from the Lord.

Here is the latest video I know of the Duggars, speaking at a Christian college in Missouri last month, sharing some secrets about being married for 30 years and raising 19 kids.

p.s. Jackson is the little boy standing two people to the left of Michelle.