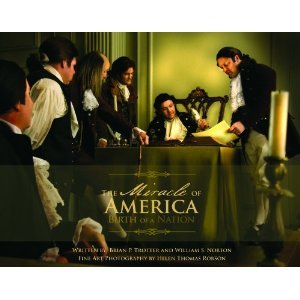 This year to celebrate Independence Day I am priming up for it by reading a little bit from these two books every day for our homeschool devotional. Some years when it’s summer I have skipped doing devotional, but this year, I feel like I missed so many homeschool days while we were moving that I want to make the most of these summer days! With three kids out of the nest I am realizing how fast the time goes and I want to share as much as I can with these younger ones to kindle their interests while I can.

The above book, the Miracle of America the Birth of a Nation is published by the good people at nccs.net. It features a bunch of stories about true miracles that happened in America. First it tells the story of the storm that came from a preacher’s prayer in the Old South Church in Boston in 1752, to sink French ships so they couldn’t attack the British colonies. The next story is about the Bulletproof George Washington. The stories that follow involve the Revolutionary War and the making of the Constitution.

I love that each story is fairly short, just right to read one a day for our homeschool devotional. I also love the photographs that have been taken of real people, in historically accurate costumes, with some taken at the replica of Independence Hall at Knotts’ Berry Farm in California.

It’s a beautiful book to treasure! I found mine at my local public library but now I want to buy my own copy to keep and share year after year! I give it 5 out of 5 stars.

This book, the Founding Fathers by Jonah Winter, features a short biography of each of the Founding Fathers. Sometimes the language seems a little too “friendly” like the author is trying to sound like a kid, with phrases like “dude,” but I am still enjoying the book. We are reading one bio a day. It’s interesting to read tidbits I haven’t read in other books, like each of the Founding Father’s stances for the Boston Tea Party, how much livestock and land each one owned as well as slaves, their religious views, the languages they mastered, years served in the military, and each one’s nickname. The back part of the book has some summaries about things they argued about and a list of Internet resources. I give it 4 out of 5 stars, because I wish the illustrations weren’t quite so cartoonish.