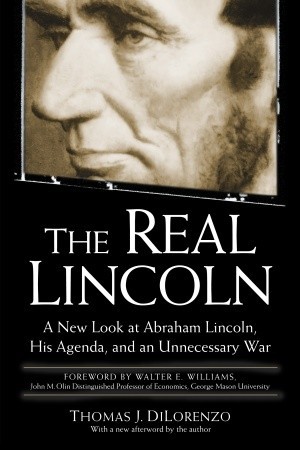 Today’s classic book for Thursday is The Real Lincoln by Thomas DiLorenzo. What an eye-opener! This is stuff I never learned in school. I am not ready to throw out my five dollar bills as a Lincoln-hater, but I sure won’t be hanging up the three foot tall picture of the guy that someone gave to me in my homeschooling room. I don’t hate Lincoln, but I don’t revere him like I was taught to do so as a child, after reading this book. I think he was misled and then misled the nation. I learned that Lincoln was the political heir of Hamilton. If you know anything about Hamilton you know that he was for centralized government. Lincoln wanted that as well. What that looked like in his day was three things: a national bank, the tariff, and internal improvements (think railroads). Lincoln inherited these ideas as part of the Republican party. The Republicans took up the vision of centralized government when the Whigs died out, and the Whigs carried on Hamilton’s legacy.

As far as the abolition of slavery, Lincoln could take it or leave it according to how it fit into his political agenda. I was also saddened to learn that he supported Sherman’s total war in the south with the attack on civilians. Somehow I never picked up on that in 5th, 7th, or 10th grade US History. That’s a whole story in and of itself. I don’t know if I would go so far as to be so negative about Lincoln as the author does, I would have to do more research to say that Lincoln was a liar, but Lincoln definitely changed American government by centralizing power when he suspended the writ of habeus corpus during the war. I encourage everyone to read this book because most of us have only heard how glorious Lincoln was and that he could do no wrong. He did many things that caused America to enter a “third founding of America”  that was no longer based on self-government of “we the people.” You can view the download over here, scroll down the page to “The Three Foundings of America.” Stephen Pratt, author of the download, endorses this book I have pictured above.

Here is an interview with the author that he recently did on The Tom Woods show, for President’s Day. Scroll down the page and find the phrase, “On Lincoln’s Birthday, Tell the Truth – February 12, 2014″ and listen in!

If you want to hear about some presidents that really deserve honor for President’s Day, besides George Washington, listen to the interview on the same page next to this guy’s picture that I am showing below. His name is Ivan Eland, and he wrote a book endorsed by Stephen Pratt called  Recarving Rushmore: Ranking the Presidents on Peace, Prosperity, and Liberty.