Recap of Shannon Hale at the Bountiful Library

It almost seems too good to be true, but Mormon mommy Shannon Hale is living her dream of being a bestselling, captivating writer! She brings joy to a lot of people and makes money at the same time doing what she loves. She was once a freckled, bespectacled, nerdy little fourth-grader with unruly hair, but now she is a charmingly beautiful, delightful woman, a wife, and Utah mother of four with this amazing ability to make people laugh, cry, and sigh in the same chapter. When I read her books I feel utterly compelled to turn page after page to digest all the richness of her imagery and follow the witty prose and entrancing plotline. She is the only Utahn to win a Newbery Honor Award. That’s the highest award for children’s literature. She has written many books that have hit the New York Times bestseller list, and one of her books, Austenland, has been made into a major motion picture. To top it all off, she got to dress up in full Regency attire and meet Jane Seymour, one of the stars of the Austenland movie. Truly, who could ask for more? (Maybe Colin Firth?)

She shows more talent by writing a sentence than most people show in a lifetime. I first encountered her amazing literary abilities in the book called The Goose Girl, and ever since then I have been an admirer. True confessions, I haven’t read every book of hers, so I guess I’m not a raving fan, but I will just use the excuse of homeschooling motherhood on overdrive as the reason I haven’t read all of them. I read Austenland and decided it was brain candy, but I loved, loved Princess Academy as a new classic. I finished reading PA  9 years ago next month, in the parking lot of the Bountiful library while I waited for my daughter to finish her homeschooling opera class downstairs in the meeting room. 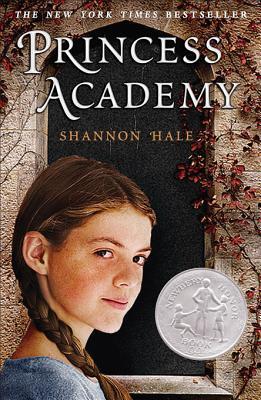 I was on the edge of the bucket seat of my Mormon Momma Assault Vehicle (Toyota minivan) while I finished the breathtaking ending of that fabulous book, while my two babies peacefully slept in their car seats, blissfully unaware of the danger of plundering bandits and narrow escapes happening in my mind. My body may have been in a plausible setting for a chauffeuring, homeschooling mom of 6 (driving my two kids 18 months apart to sleep was a frequent occurrence), but my mind was far away in the land of Mt. Eskel, quarry speech, competitive adolescent girls, and carving linder. Little did I know that 9 years later, my mind and body would be present at the same library, where I would get to see Shannon in person, the author of that same book!

Here is a recap of what she said last night at the Bountiful library. I arrived 45 minutes before starting time to get a decent seat, and my efforts were not in vain. They didn’t open the doors to the seating area until 30 minutes before the event started, so I got to stand in line. That was OK, since I was standing in line inside the library and got to peruse the books. I found a great one about a woman, mom, and writer who lives in Alaska. One page and I was hooked! Anyway, back to Shannon… I got a third row seat so I was very happy! That was close enough to snap some pictures! These aren’t the greatest pix because I don’t have the greatest camera, not to mention photography knowledge, like my dad does (now there’s a camera!) but they are better than nothing.

First she showed a photograph in her powerpoint of when she was an adorable toddler. She said she was telling stories as soon as she could talk, even though it was incomprehensible baby babble. Life seemed perfect when she was that cute, but then she grew to be an awkward fourth grader with glasses and thick bushy hair.  She started to feel rejection and life became cruel. She is currently working on a memoir about her life in fourth and fifth grades. I am pretty sure she said that it would be a graphic novel. (What is it about 4th grade? That sounds so familiar. I got glasses and had a bush in 4th grade. That’s also the grade where I first felt peer criticism and snubs.)

Seventh grade was even worse. I had to laugh during this part, as I felt such a kinship with her. We are both children of the 80s (translation: perms and bangs to heaven were in). “The higher your bangs, the more beautiful you were.” She showed a picture of her 7th grade picture in her attempts to achieve both, but she said that her “claw” of bangs fell flat and her permed hair, in an attempt to have gorgeous corkscrew curls like Khrystyne Haje of the Head of the Class TV sitcom, turned out like a “fried haystack.” (LOL here! My sisters and I begged my mom to perm our hair when I was in 7th grade. I don’t know why, since puberty turned my hair naturally wavy and it really didn’t need any more body or curl. I ended up looking like an electrocuted poodle with overgrown hair, since it to my waist.)

She was so self-conscious that she carried around a small mirror, not so she could primp, but so she could always check to make sure a booger was not hanging out of her nose, because if such a thing should happen in the frightfully judgmental world of the pit of civilization called junior high, you might as well move if such a thing should happen.

She grew up and graduated from college (U of U, which elicited big cheers) and then got a master’s in creative writing at U. of Montana (no cheers, sadly, Montana was not represented last night). She had heard that to be great at something, you have to do it well at least 100 times. So she wrote 100 stories before she even asked for one to published. When she did start sending off the manuscripts, the rejection letters came pouring in. She showed a laminated roll of all the rejection letters that stretched across the room. Potential publishers said that her first pitch, The Goose Girl, was “trite,” “full of cliches” and wouldn’t engage today’s YA crowd. But she persisted. She finally got a yes, and it ended up being voted one of the top 10 books for YA the year it was published. Thirteen years later, it is still in print and is on the Top 100 YA books of all time. So much for those earlier judgments by the publishers who turned her down! Shows how much they knew! We all applauded for her and she teared up a bit!

She commented that that’s how rejection is sometimes. Rejection is a way to scoot you somewhere else, to a better place, although it is painful at the time. So keep persisting!

Then she wrote Princess Academy, and it got a Newbery Honor Award. It has also won over a dozen other awards and nominations. She is the only Utah author to ever win it. She said that schoolteachers use her book in classrooms for literature study. Girls loves hearing that they will be reading it for school, and the boys never fail to boo. Then she asked the boys out in the universe, why are you scared of a book that has “Princess” in the title? What has a princess ever done to you? Stolen your bike? Killed your dog? Read this book to learn the inner workings of the female mind and your life with girls will be much more fun and successful. Then she showed pictures of all these guys who dare to read PA and have even survived, like Jon Sciezka.

Usually she comes up with her own stories, but at one point, her agent called her and said that a company wanted to pitch a story to her that was top secret. It turned out to be Mattel. They flew her to the headquarters and asked her to fill in the details of the skeletal stories they had for the Ever After High series. She accepted, only because she loves the theme of agency that underlies the books. What if the daughters of Snow White and her nemesis, the stepmother queen, were to grow up and choose a different destiny? I haven’t delved into these books but they look like something my 9 year old avid reader will enjoy! More bedtime story read aloud ideas!

She concluded by reading some pages from Princess in Black, which looks utterly delightful. I just put on hold at the library!

Some fun news, besides the announcement of her writing her 4th/5th grade memoirs:

She graciously stayed for who knows how many hours (I left before 9, because I sadly didn’t have my, rather, my daughter’s copy of PA, since she took it with her to college, and I don’t own any of the other books) signing books and posing for selfies. Thanks for a wonderful evening Shannon! It was definitely one of the best nights in Bountiful’s history! (Inside joke reference from what she shared in the presentation. She said that she had been to Bountiful before for a book signing and someone said that line. Then when she shared that with her siblings at a dinner right after that they all laughed.) 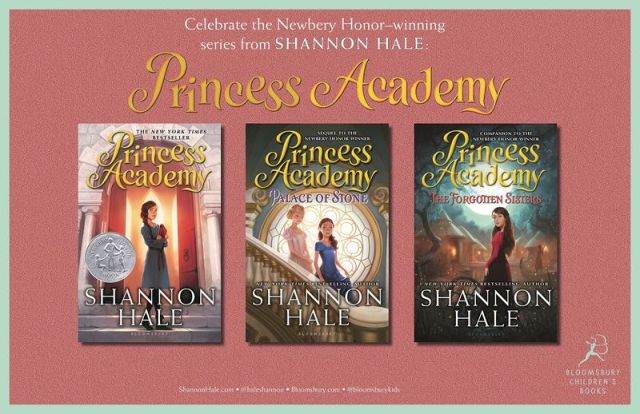