Five Little Peppers: A Great Read Aloud that You Can Find Free Online 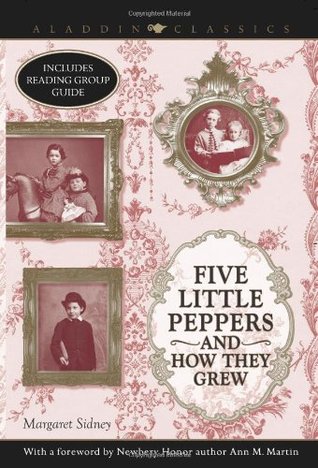 Finally! I remember my mom starting to read this book aloud to us when I was a kid. She never finished it, at least with me. Maybe with my younger sisters. Then she passed the book down to me, so I started it with my older kids, and never finished! I finally got it done with the littles in February and now we are reading the sequel, Five Little Peppers Midway.

It’s a great story because it’s about kids who are poor yet happy. They are grateful, never complain, and work hard. It’s simple and sweet and about finding joy at home. I just learned this past winter when I was reading the first book that there’s a whole series!* Now I want to read them all!

You can find the text for the first book free here, and for times when you don’t want to read it, because say, you have a sore throat, or you have to be doing something else (like talking on the phone or sleeping), you can play the Youtube version found below. Enjoy! It’s tempting to stop reading aloud when kids get bigger, and when the days are more conducive to being outside. Here’s to summer reading with big kids!

Here’s the movie based on the book!

* the following is copied and pasted from wikipedia:

In order of publication, the Five Little Peppers books are as follows (publication dates follow in parentheses):

Margaret Sidney felt she had completed the books with the publication of the fourth book: “Phronsie Pepper”, and stated as much in her introduction to the book. But letters from readers all over the world prompted her to continue writing about the Peppers, which she did for another nineteen years. All of the later books take place much before the third book in the original series. To read the six key books in chronological order, rather than by publication date, they would be read approximately in this sequence:

The other six books are “background” and are set about the time of the first three books listed above chronologically. Since they were written many years later, some situations in them are at variance with those same situations as described in the earlier written books.