A Sugar Free, Gluten-free Cake for Your Valentine!

Posted on February 13, 2017 by treeoflifemama 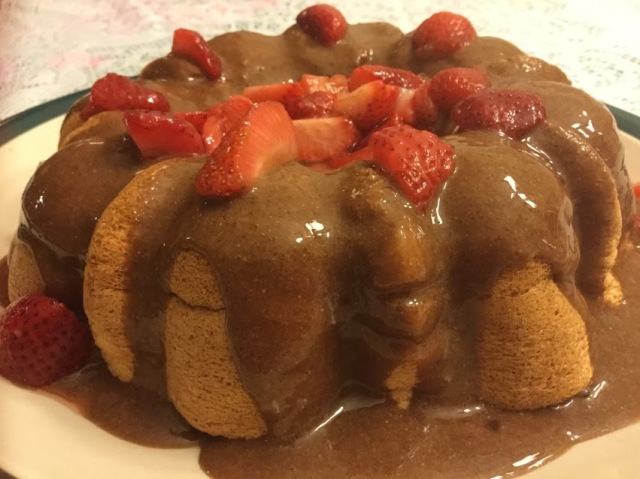 Here is a yummy cake that is light, fluffy, and won’t add any inches to your waistline. Serve it tomorrow for Valentine’s Day! In the Trim Healthy Mama World, the basic cake, without the strawberries, or the chocolate topping, is known as a Fuel Pull (FP). That means it is low in fat and carbs. So you can eat it with something high carb, or something high fat, and it won’t cause you to gain weight. Just don’t mix high carbs with high fats. That is what is known as a crossover, or XO, in the THM world, and that is what causes weight gain, in the THM world or even out of the THM world. 🙂 The topping is the chocolate gluccie pudding from the THM cookbook, and then I added sliced strawberries. If you eat the strawberries and don’t just use them for decorations, the cake will stay in FP territory if you eat 1 c of berries or less. Once you go past 1 cup, it becomes a high carb, or E dessert. So then you would want to eat it only after an E dinner, so that you don’t gain weight.

Here is how I made it:

The cake is the Butterfly Wings cake recipe from the Trim Healthy Mama Cookbook, p.301. Here is a similar recipe from this blogger over here, called “Angel’s Cake.” It is light, spongy and yummy, just like angel food cake! It’s basically whipped egg whites with a non-gluten flour and a non-sugar sweetener. I baked it in a greased bundt cake pan. It seemed like it filled more than half the pan before I baked it, but then after it baked it deflated. So next time I make it I will double the recipe, and then put a cookie sheet under the cake pan in the oven, just to catch any spills that might happen before it deflates.

The chocolate gluccie pudding is on p. 350 of the THM Cookbook. You can also get the basic recipe from the video below. I used the lower range of gluccie, aka glucomannan, the 1 1/2 teaspoon amount, so it would be pourable and not so gel-like. The puddings are also FP!  Great news, because that means they are low calorie. They hardly have any fuel to them. They make a great light snack or dessert. Enjoy!