Let the Book Speak for Itself, Without a Title, So Any False Preconceived Notions Aren’t Stirred Up

Posted on August 9, 2019 by treeoflifemama

“And moreover, I say unto you, that the time shall come when the knowledge of a Savior shall spread throughout every nation, kindred, tongue, and people. And behold, when that time cometh, none shall be found blameless before God, except it be little children, only through repentance and faith on the name of the Lord God Omnipotent.” Mosiah 3:20-21

I finished the Book of Mormon by the end of 2018, to follow the prophet’s challenge that he gave to the women in The Church of Jesus Christ of Latter-day Saints in October 2018. Then, as a family, we finished in January 2019. To top it all of, my nine-year-old finished on his own in June. I’ve lost count of how many times we’ve finished it. It’s one of of our family’s central classics that we turn to again and again to strengthen our core faith. Just like the Bible. 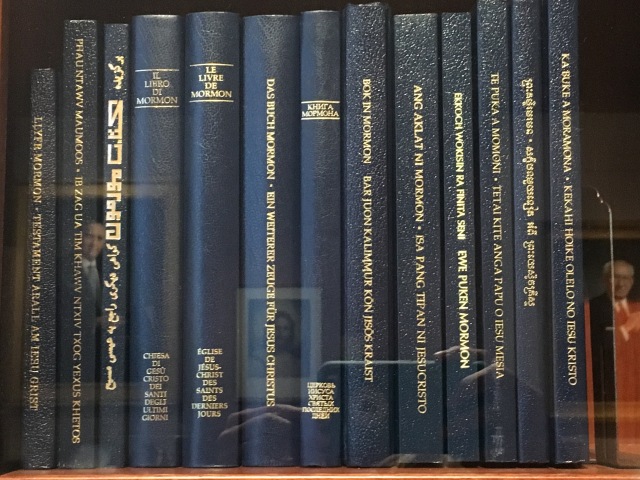 Some copies of the Book of Mormon in different languages on display in a glass case at the Museum of  Church History and Art.

“I think a book like this can help people find answers when they are in darkness.” – quote about the Book of Mormon from a non-religious person.

That’s what I love about the Book of Mormon. Reading it can give you answers if you read it with a sincere heart, intent on finding answers to your sincere questions, not matter who you are, religious or not. Just like the Bible. It really doesn’t matter who you are, as long as you are sincere. I promise you, that if you read it sincerely, it will bless you. It will give you light in the darkness.

What happens when people actually read words from the book, without knowing the title of the book, without knowing where the words come from?  The video below shows an experiment done by some students at BYU. They copied excerpts from the book, showed the excerpts to random people on random streets in big cities, and asked the people’s opinions about what they just read. In other words, they let the book speak for itself, by having it speak to people with no preconceived notions of what they were reading, because they weren’t told the title of the book. The result? Watch below:

I love this! I love the Book of Mormon! I testify that it testifies of Jesus Christ. It will lead you to Him and help you follow His teachings, so you can feel joy and peace. Here are 10 gems from the Book of Mormon that fill my heart with light and hope and why I like them.

This verse explains that Jesus shows himself to everyone who seeks him. Everyone! Not usually in person, but He manifests Himself in Spirit and or other ways according to our best good. Jesus is for every nation, kindred, tongue and people! He works “mighty miracles, signs, and wonders” among the whole earth. That’s amazing! I love hearing stories about Him showing His grace, peace, comfort, and power in people’s lives. I have definitely felt His power in my life.

2. “For behold, the Lord doth grant unto all nations, of their own nation and tongue, to teach his word, yea, in wisdom, all that he seeth fit that they should have; therefore we see that the Lord doth counsel in wisdom, according to that which is just and true.” Alma 29:8

Why I like that verse: No nation or group has a monopoly on truth. God gives wisdom to all according to their readiness to receive truth, to all nations, across the globe, throughout all history. God is so generous!

3. “Now, concerning the state of the soul between death and the resurrection—Behold, it has been made known unto me by an angel, that the spirits of all men, as soon as they are departed from this mortal body, yea, the spirits of all men, whether they be good or evil, are taken home to that God who gave them life. And then shall it come to pass, that the spirits of those who are righteous are received into a state of happiness, which is called paradise, a state of rest, a state of peace, where they shall rest from all their troubles and from all care, and sorrow. And then shall it come to pass, that the spirits of the wicked, yea, who are evil—for behold, they have no part nor portion of the Spirit of the Lord; for behold, they chose evil works rather than good; therefore the spirit of the devil did enter into them, and take possession of their house—and these shall be cast out into outer darkness; there shall be weeping, and wailing, and gnashing of teeth, and this because of their own iniquity, being led captive by the will of the devil.” Alma 40:11-13

Why I like that verse: it comforts anyone who loses a family member to death. “The spirits of all men,” when they die, go home to  that “God who gave them life.” These verses show both mercy and justice. Those who have lived according to goodness and the light and truth they have get the just reward of paradise. Those who have chosen “evil works rather than good,” get their fair reward as well.

4. “For behold, the time cometh, and is not far distant, that with power, the Lord Omnipotent who reigneth, who was, and is from all eternity to all eternity, shall come down from heaven among the children of men, and shall dwell in a tabernacle of clay, and shall go forth amongst men, working mighty miracles, such as healing the sick, raising the dead, causing the lame to walk, the blind to receive their sight, and the deaf to hear, and curing all manner of diseases.” Mosiah 3:5

I love that verse because it demonstrates that people knew that Jesus was going to come many hundreds of years before He was born. (The speaker of those words, King Benjamin, lived hundreds of years before Jesus.) Heavenly Father, in his merciful, beautiful, orderly plan, inspired prophets to tell people about Jesus, before He was born, to give them hope. God always wants us to have hope!

5. “And ye will not suffer your children that they go hungry, or naked; neither will ye suffer that they transgress the laws of God, and fight and quarrel one with another, and serve the devil, who is the master of sin, or who is the evil spirit which hath been spoken of by our fathers, he being an enemy to all righteousness. But ye will teach them to walk in the ways of truth and soberness; ye will teach them to love one another, and to serve one another.” Mosiah 4:14-15

That verse pops into my mind whenever my kids fight. It motivates me to help them stop.

6. “And it came to pass that I said unto them that I knew that I had spoken hard things against the wicked, according to the truth; and the righteous have I justified, and testified that they should be lifted up at the last day; wherefore, the guilty taketh the truth to be hard, for it cutteth them to the very center.” 1 Nephi 16:2

If I’m finding it hard to accept something, maybe that’s a sign that I’m guilty and need to change? Ouch.

7. “Yea, and how is it that ye have forgotten that the Lord is able to do all things according to his will, for the children of men, if it so be that they exercise faith in him? Wherefore, let us be faithful to him.” 1 Nephi 7:12

I remember reading this verse as a teen. It hit me so hard. It has always given me assurance that the Lord can do all things for me, according to His will, conditioned on my faith in Him. He is the most generous, loving, liberal god that we could ever hope to have.

That verse reminds me of the importance of receiving the word of God. The more I receive, the more I will get.

9. “Wherefore, do not spend money for that which is of no worth, nor your labor for that which cannot satisfy. Hearken diligently unto me, and remember the words which I have spoken; and come unto the Holy One of Israel, and feast upon that which perisheth not, neither can be corrupted, and let your soul delight in fatness.” 2 Nephi 9:51

Nephi knew our “constant-stimulation-24/7” day would come, with its empty calories for the mind and body. He guides us to seek for that which is rooted in Jesus Christ. If it’s not, we will never be satisfied. This is the one place in the scriptures giving us permission to get fat on good stuff! I love it!

1 Response to Let the Book Speak for Itself, Without a Title, So Any False Preconceived Notions Aren’t Stirred Up