Posted on March 2, 2020 by treeoflifemama

I’m back sharing a book and a game a day that I’m doing for the #abookandagameaday challenge from thewaldockway.com. For the record, I’ve been playing a game (usually more than one) and reading a book a day for every weekday of the New Year, except for Friday February 7 when I was in Utah away from my kiddos. Last month I got in a time crunch with some other deadlines so I gave up blogging about our books and games each day, I’m hoping to do better at tracking here on the blog this month of March. It has brought much joy to my life! Yay!

So we talked about Laura Ingalls Wilder a bit, with her birthday being last month, which I’m sad I missed celebrating, because of my trip to Utah, and then we played Letter Jam and Say Anything. 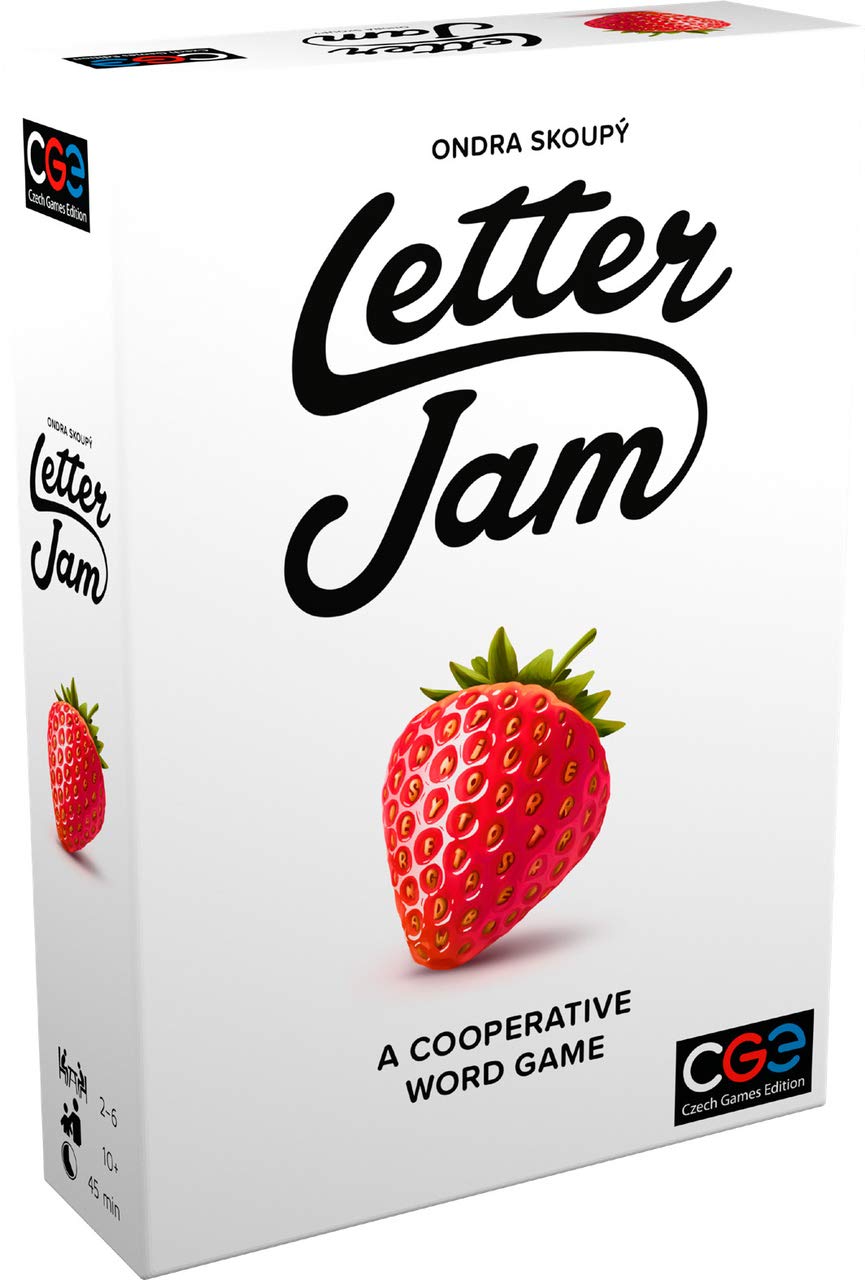 The first was Letter Jam. This was the second time I’ve played this game. My oldest child, the biggest game playing fan of all us, gave it to me last Christmas, after seeing it debut at a board game convention. It’s absolutely delightful! The first time I played it was two days after Christmas, with my children. I highly recommend that you not play this game on a tablecloth, like we did that time. The tablecloth swallowed up one of the tokens which caused me to miss one of the clues, so that totally foiled my deduction of my secret word. I felt so frustrated!

In this game, everyone gets a secret word, spelled out with letters on cards. Everyone can see the letters of all the other players’ words, one at a time, but not their own. You work cooperatively as a team to give each other clues about each others’ letter by using some or all of the letters displayed to spell a word. The pool of letters is constantly changing. It’s a lot of fun! Two of my sons didn’t like it however. One because he didn’t completely understand how it worked. The other son guessed his word and then mentally checked out, not wanting to participate anymore to help other people figure out their words by giving clues. I reminded him that the game is like life, where you only win by helping other people win. In the words of Elder Dieter F. Uchtdorf: “the only way for you to progress in your gospel adventure is to help others progress as well.” Just substitute the word “gospel” with “game” and you perfectly describe this game. We only played with three letter words, which I highly recommend for doing with kids and/or beginners. I’m looking forward to playing this at my next Adult Gameschooling Night or Game Date Night with Adults that I host at my home. It will be more fun with adults who aren’t bickering and don’t get flustered with long words. 🙂

Then we played Say Anything Family Edition. This is probably the best party game ever! It involves questions, but they’re not trivia questions. These are questions to get to know other people better. So you win according to how well you know the other players so that you correctly predict their opinion, and how well you can read body language, to see if you can tell if other people know the answer. You also win by writing creative answers. Such a clever idea!

So if you are in the mood for a game, but don’t want a game that involves a ton of strategy and hardball thinking, then pick Say Anything Family Edition (apparently the non-family edition can get more risque with the questions). I picked it last week for Family Night when I wanted something to encourage sociable feelings and wanted to relax and not strategize. It fit the bill perfectly! It’s similar to Wits and Wagers, which I played with my parents and son, over here on my last visit to Utah, but instead of using questions that involve numbers for the answers, you use questions that involve the players’ opinions. I love it! I will be playing this one again and again! I scored by getting it used while thrifting, for $2.40 (20% off the $3 price with my teacher discount at my local Goodwill). Sweet! 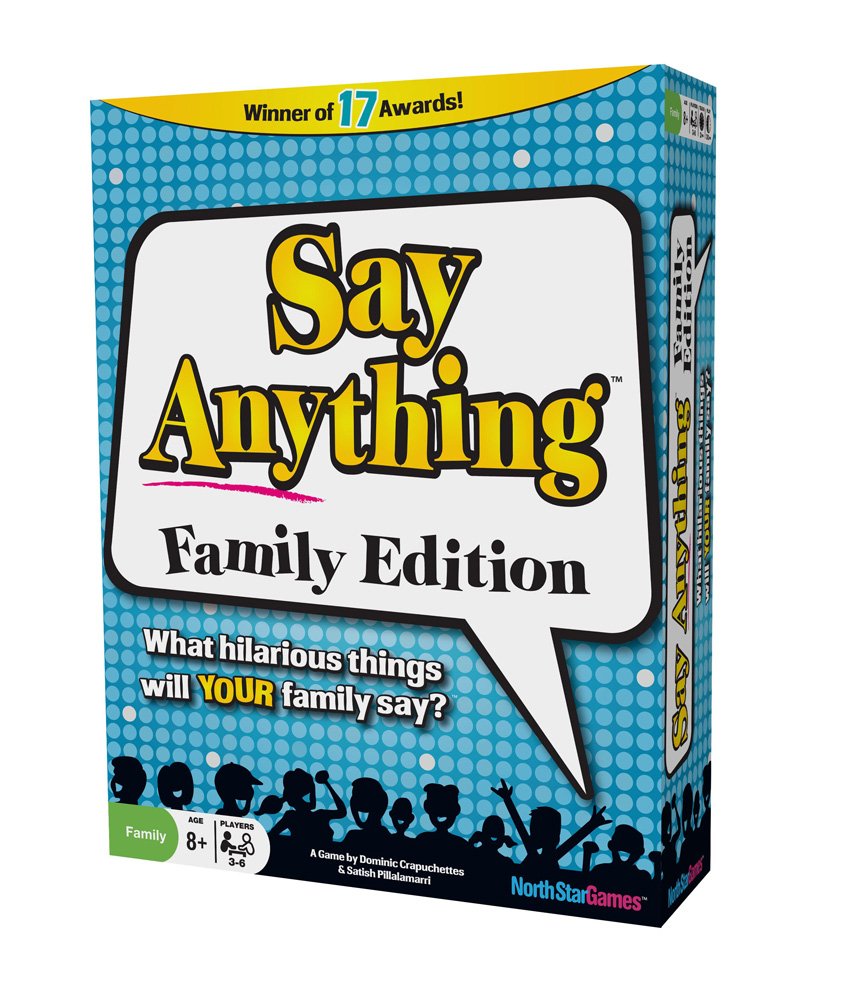 I’m also feeling awfully pleased with myself that I correctly predicted the metagame workings that might happen with Say Anything. The metagame is the game behind the game, the game that involves the player’s personalities and feelings. I learned about the metagame by reading Ellie Dix’s The Board Game Family, which I preview slightly over here, the fourth paragraph down, and give you a link where you can read it for free. It’s really important to watch what is going on with the metagame and use that intel to improve the next iteration. Watch the video of Ellie below to learn about it.

Based on previous metagames with my group, I knew that some of the kids would not vote for certain other people’s answers if they could recognize handwriting on the dry erase boards, so I had each player write their answer on slips of paper and then my mom friend and I each copied the answers onto the dry erase boards provided in the game. Sure enough, during one of the rounds, when a certain player found out that a certain person had written a certain answer that she ended up choosing, she wanted to recant her vote! Of course we wouldn’t let her and the original vote carried. Everyone had fun, whereas if I hadn’t had inserted that piece of the game where we didn’t show their handwriting, I think there would have been some arguing. So if you have personalities that clash, I highly suggest you use slips of paper, and then copy the answers onto the little white boards. If you want to save the time of having to rewrite the answers, then just read out loud the answers with numbers attached, and have the kids vote for the numbered answers, writing the the numbers on the white boards, maybe with a keyword.

Happy gameschooling everyone! Here are more ideas, including how to build a gameschool collection on a budget.