Posted on January 31, 2020 by treeoflifemama

On Thursdays we drive 90 minutes one way to participate with other homeschoolers in a co-operative type school run by homeschooling moms. At this co-op, I teach a Hero Project class on the World Wars. In that class, we read aloud the poppy poem for World War 1 written by John McCrae. Then we listened to this book, above, about a woman who wanted to give tributes to WW1 veterans by giving them poppies. See video below.

Then we played the Chameleon card game to facilitate a discussion of The Faithful Spy, a graphic novel about Dietrich Bonhoeffer. We played the game the day before with my kids and some friends, and then we got to play it with my Hero class. I was so excited to pair it with The Faithful Spy! The book is so amazing, about such an amazing man! You’ve got to read it! My favorite part of the whole story is how he had a dream at the end, about Jesus, that was such a gift to give hope as his life was ending in prison. My second favorite part is how it was visits from his beautiful sweetheart, Maria, in prison, that also gave him hope that he had life beyond what the Nazis were doing to him. Such is the power of the love of a good woman!

I made new topic cards for the game, with all the topics coming from Bonhoeffer’s life, as mentioned in the book. Then I asked discussion questions in-between game rounds, mostly from this study guide over here. I tied the questions into the study guide. The Chameleon game was perfect to use because Bonhoeffer had to be a “chameleon” and appear to have allegiance to Hitler, in order to blend in as a double agent spy and take part in the plot to assassinate the evil tyrant. 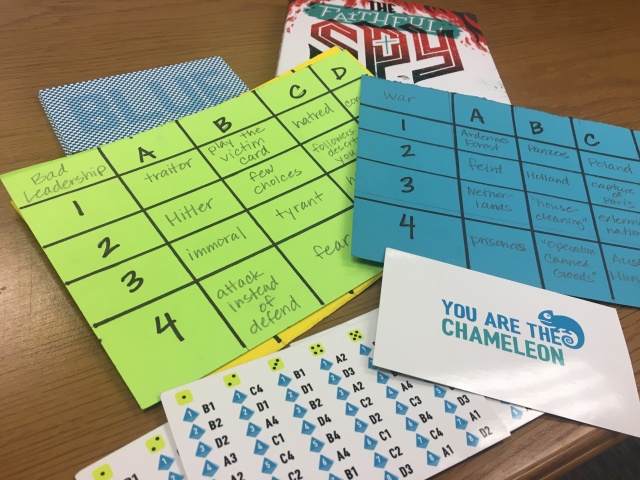 Check out my tips for building a gameschool collection on a budget here, and see what else we’ve played for gameschooling here.