Posted on January 29, 2020 by treeoflifemama 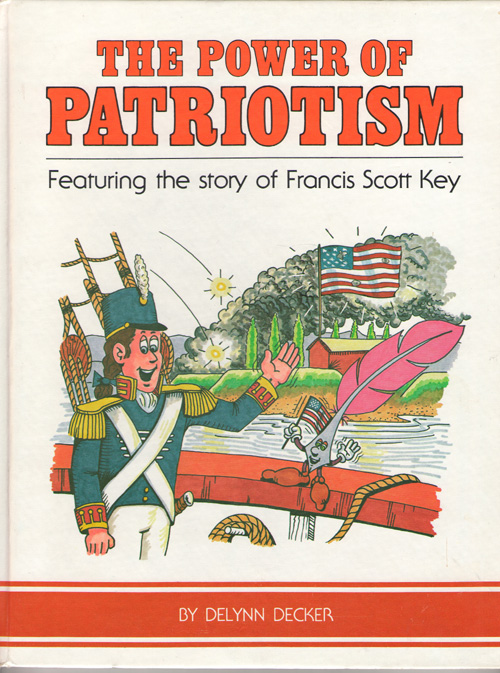 Today was History/Geography Day for our 2020 #abookagameaday gameschooling challenge. So we did the above book, featuring the backstory of the Star-spangled Banner. Because of this book, I understand how the Star-Spangled Banner came to be. I already knew about Francis Scott Key and Dr. Beanes, from a different picture book, but I didn’t fully understand why they were being held captive through a battle, and why Francis Scott Key was a patriot until I read this book.

I found it used years ago at a thrift store and got it for my little boy’s birthday. (Through the years I’ve attempted to always get a book for a child’s birthday present in addition to a fancier, more wanted gift, to send the message that I highly value books. Just to make sure they know, LOL! I haven’t always been able to afford a brand new book but I can always scrape together enough money to get a used one.)

When I was a kid my grade school had the whole set of these “PowerTales” books with the accompanying cassette tapes. We were allowed to listen to/read them during our lunch break in the “Media Center” with clunky headphones. It’s fun how each real-life person chronicled in each book has some little sidekick/gadget/animal who narrates the story. What great memories! Years ago, my mom got some great deal on the companion “ValueTales” series and bought a set for each of her children to benefit the grandchildren. While I don’t love the cartoonish drawings, I do adore the stories, and that each one shows a value lived out without being overly preachy. We will be reading these each Wednesday this semester. They are long though so we will break each one up into two days’ readings. These books are out of print but you can scout them out at yard sales, thrift and online stores. They are worth finding and reading over and over! 4 1/2 out of 5 stars, just because of the too-cartoonish drawings.

For our games, we played the following, as requested by one of our January birthday girls:

First Chameleon. This is such a fun game! It doubles as a great party game as well as an educational game.

You can adapt it to discuss any kind of theme involved with any class you are teaching by making your own topic cards that relate to your theme(s). So tomorrow, I am using it in my Hero Project class when we discuss The Faithful Spy, a graphic novel about the German Christian theologian-turned-spy Dietrich Bonhoeffer. What good fortune I have! I picked it up in practically new condition from a thrift store for $4 in November. It’s the perfect game about spying, because in this game, “chameleon” is synonymous with “spy.” So I am making topic cards using keywords and phrases from Faithful Spy, and interspersing discussion questions to ask between rounds of play. It should be so much fun and meaningful as well! I can’t wait! Bonhoeffer had to be a chameleon in his efforts to foil Hitler, for sure! One of the pages in the book shows him saluting Hitler, when in reality, he was a double agent who did not like Hilter and was working to get him assassinated.

Then we broke up the group to play some two-player games. The birthday girl chose checkers. So because we couldn’t all play checkers, some of us played Bananagrams, some tic-tac-toe, and I got to play Chick-a-Pig with my little guy. I discovered this game from a friend at church. She loaned it to me and my little guy liked it so much I got it for his “fancy” gift for Christmas. We played it a ton on Thanksgiving Day. After many times of him beating me, over the past two months since knowing about it, I finally learned his tactics. Using them against him today, I won! This is such a clever game. I love that it combines elements of chess, soccer, and pinball with a farming theme. Very fun! It’s a 2 to 4 player game. 5 out of 5 stars. It’s extra cool that it was developed by the guitarist Dave Matthews. It teaches strategy and looking ahead (vision), as well as sportsmanship for when you consistently get low rolls of the die. That happened to my son today, while I got several high rolls of the die. That definitely helped me win.

That’s it for today!

Check out my tips for building a gameschool collection on a budget here, and see what else we’ve played for gameschooling here.