Posted on October 16, 2019 by treeoflifemama

I absolutely loved General Conference! So many wonderful stories! My favorite stories were the two that Elder Gary Stevenson told. Both involved the innocence of children in not understanding true identity. In the first story, he said that he discovered his little boy chasing after their black dog, attempting to paint it white so it could be a black and white Dalmatian like in the Disney movie. In the second story, his family went to visit their Great Uncle Grover. While the adults were chatting, the little boys of Elder Stevenson went out to play. When they came back, Great Uncle Grover asked if they had seen any skunks. They said no, but they had seen a nice white and black kitty cat. It was really a skunk. Both these stories made me smile, because they show the endearing innocence of childhood. I learn from both of them that not understanding true identities of things can cause spiritual harm if it involves eternal nature of people. 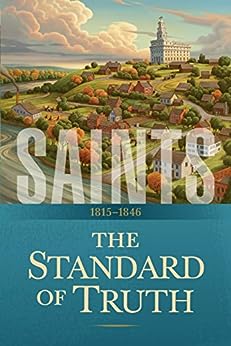 That’s why I love the book Saints. It shows real people from the early days of the history of The Church of Jesus Christ of Latter-day Saints. They were imperfect, just like us, but strove to come unto Christ and be made perfect in Him. I was delighted to see that in between the Saturday conference sessions, the Church presented a show that went behind the scenes of the making of the Saints book.

I was also thrilled to learn from watching the behind-the-scenes program that Saints has a podcast! I downloaded it immediately and have loved hearing the stories.

Last month, I decided that even though I had finished listening to Saints in audiobook format last spring, I wanted to listen to it again. My mind tends to wander during audiobooks so I’m sure I missed a lot. I decided to listen to a chapter a day this fall semester while riding home from the seminary class my two homeschooling scholars attend every weekday morning. The average length of a chapter is 15 to 20 minutes, which is perfect, because that’s the length of the car ride.

Then I realized, hey, I’m going to make this a tradition every fall, to fit in with the October theme of heroes that I use in my Celestial Family Devotionals ebook. By this coming winter, surely, all of Saints Volume 2 will be out on audio (the complete print version is supposed to be out this fall). So a year from now when our school year starts in September 2020 we will review both books. I am hoping to start Volume 2 around Christmas and be done with it for the first time in the spring.

Two years ago for Halloween, I hosted a Hero’s Party (before I had heard the term Heroween). I invited some friends to come over and dress up as a hero and then give clues as to who they were so we could guess. We had Anne of Green Gables, Abigail May Alcott, Laura Ingalls Wilder, Mother Teresa, Jane Austen, Elizabeth Blackwell, and more that I don’t remember.

We had a lot of fun as we sat around the fire burning in my firepit, sharing stories of great people, and eating s’mores. Then last year, my son returned home from his mission to Argentina on Halloween. So we sat around the fire to hear his mission stories. But the weekend before, I had a Heroween party for my Quest scholars. (Quest is a LEMI Scholar Project I mentored last year. It is all about hereos who move the cause of liberty forward.) It was an amazing party. First we had homemade Chinese food made by Kimberly and her daughter, one of my Quest scholars.

The food was amazing! Kudos to Kimberly and her daughter Lilly!

Then we watched the movie Greater on a big screen in Kimberly’s backyard. If you haven’t ever watched it, go get it! You are in for a treat! It totally shows the story of a Christian Hero’s Journey. The amazing part is, is that it’s true! I think I’m going to watch it again this year again and make it an October tradition. It’s such a great fall/harvest/football/Christian hero movie. Best of all, I can use it to inspire my children, since two of them looove football.

Then those of us who dressed up as heroes gave clues as to who they were for a guessing game. It was the perfect fall, harvest party.

I just love the idea of using October with its harvest theme to talk about heroes and the harvest of their fruits, their good works. Halloween can be a day to dress up as heroes, and then that makes it a Heroween day. Halloween comes from the term “All Hallow’s Eve” because it was the eve of All Saints Day. So I celebrate the eve of All Saints Day, Halloween, by celebrating saints and other heroes. So when I made my  family devotionals ebook, I included as the theme for October the lives of great people. That includes scholars, reformers, authors, inventors, and saints.  I compiled songs and stories about great people. I remember wishing there could be a book about saints that was easily readable for my children. Then the Church came out with the book Saints a year later, so I felt overjoyed. It was as if the Church had read my mind and granted my desire. (You can read all about my discovery from a year ago, fall of 2018, about the journey all heroes take and the Christian covenant path here.)

So for this year, I decided to combine Heroween with All Saints Day. Since Halloween is on a Thursday, my son will be playing a football game that night, because his team plays all their games on Thursday nights. Then Friday night will be the last varsity football game.So we will have our Heroween party/All Saints’ Day party on Sat. Nov. 2. In addition to having my scholar children listen to Saints, I’m asking all my adult children out of the nest and husband to read/listen to it too.  A chapter a day is easily doable by listening on the Gospel Library App. Then we will gather online to play the guessing game and share stories about what we’ve read. I’m excited to see if they can guess the person I picked!

The video below shows what happened behind the scenes to make Saints the book. I absolutely love it! The music alone featured in the interludes makes me want to join an orchestra again.